The 1713 Guarneri cello on sale in our November auction has passed through the hands of several distinguished cellists in the last two centuries. 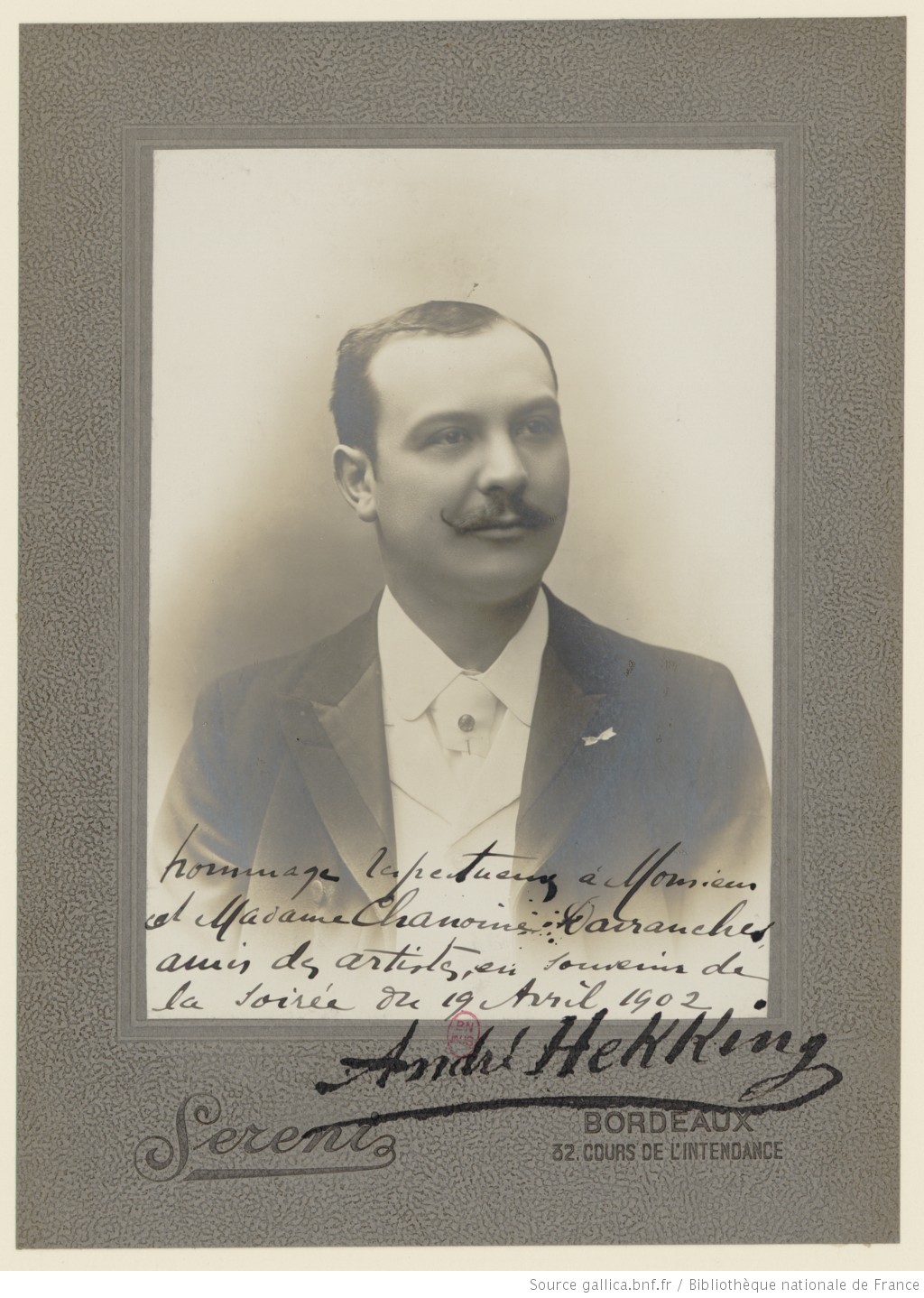 This beautifully proportioned instrument has attracted several notable owners in the last centuries. While not much is known about its early history, we know that it was owned by the French cellist André Hekking (1866–1925). He was born in Bordeaux and by the prodigious age of 15 was touring Europe, renowned for his rich tone and the integrity of his interpretations. He gave the world premiere of Fauré’s First Cello Sonata (not to be confused with his cousin Gérard Hekking, who gave the premiere of Fauré’s Second Cello Sonata) and was the dedicatee of Saint-Saëns’ Prière, as well as works by Pierné and Moór.

From 1909 Hekking devoted himself to teaching, joining the faculty of the Paris Conservatoire in 1919 and teaching at the illustrious American Conservatoire at Fontainebleau. His students include Pierre Fournier, who typified the elegant French school of playing, and Hekking wrote a set of left-hand exercises for cellists.

Hekking’s daughter Jeanne married Marcel Vatelot, who had founded the famous Vatelot workshop in 1909, which he renamed Vatelot-Hekking on their union. In 1919 Vatelot-Hekking sold the Guarneri to Marc Laberte (1880–1963). There are certificates from this time from Chardon et Fils in Paris and Pierre Hel in Lille as well as the receipt for 18,000 Francs and a certificate from Vatelot-Hekking.

Laberte was the second generation of the Laberte-Humbert Frères workshop, founded in 1876 in Mirecourt, which was at the time the centre of French instrument making. Laberte trained as a luthier and bow maker, playing an active role in the business. The company held a collection of fine instruments that were used as models for their own, and presumably he bought this cello to be copied by its makers. 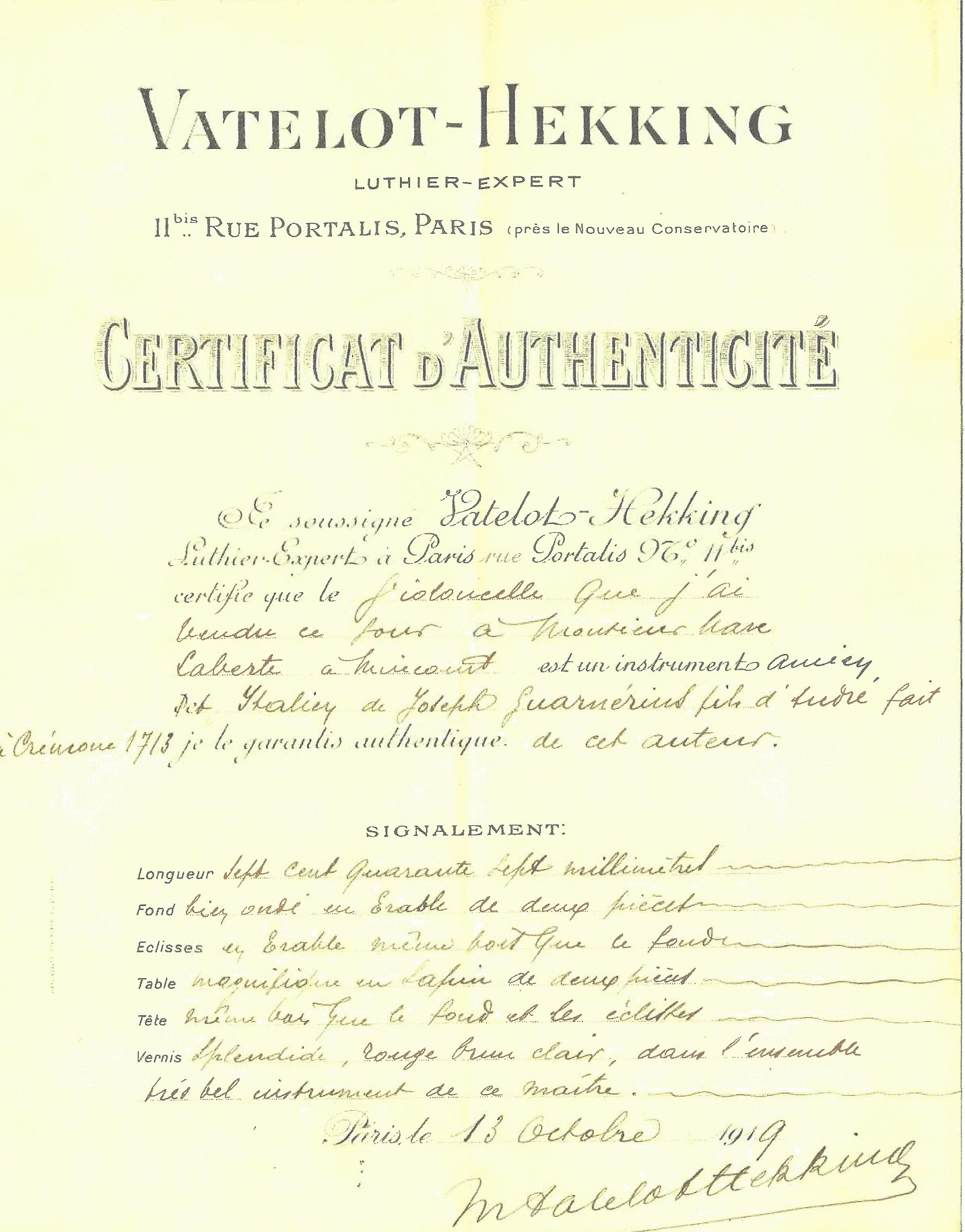 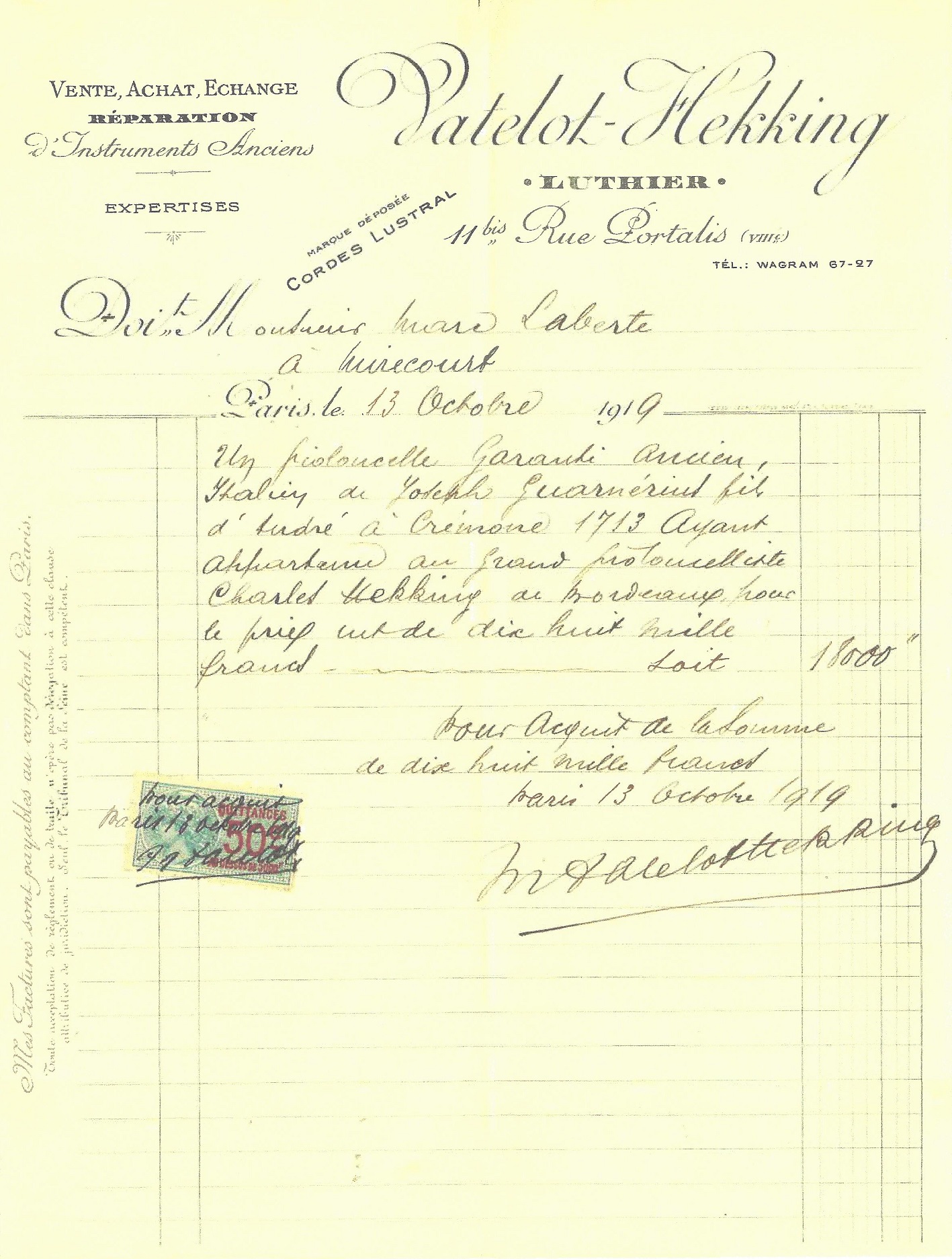 By 1961 the cello had passed to the Swiss cellist, viola da gamba player and conductor August Wenzinger (1905–1996), one of the pioneers of historically informed performance. He originally studied cello with Emanuel Feuermann in Berlin, and served in the Bremen City Orchestra and Basel Allgemeine Musikgesellschaft. Already as a student, he developed an interest in early music, studying the then obsolescent viola da gamba and making some of the first recordings on the instrument. He taught cello and viola da gamba at the Schola Cantorum Basiliensis, as well as at Harvard and Brandeis in the US, and his students included Jordi Savall.

As early as 1949 Wenzinger conducted the recording of a period performance of the Brandenburg Concertos and one of the first LPs of Monteverdi’s L’Orfeo, and he visited the BBC Proms in 1971 to conduct the English Chamber Orchestra in a performance of Bach’s St Matthew Passion. While his influence on period performance is undoubtable, he is perhaps best known by modern cellists for his 1950 Bärenreiter edition of the Bach Cello Suites, which is still one of the most popular versions.

The instrument next passed to Hungarian cellist Zoltan Racz and in 2007 it was bought by the current owner, who loaned it for many years to the Deutsche Stiftung Musikleben, which offers its instruments to talented young players.

Original label inside the cello by Guarneri 'filius Andreæ', 1713

The model of this cello is beautifully proportioned. 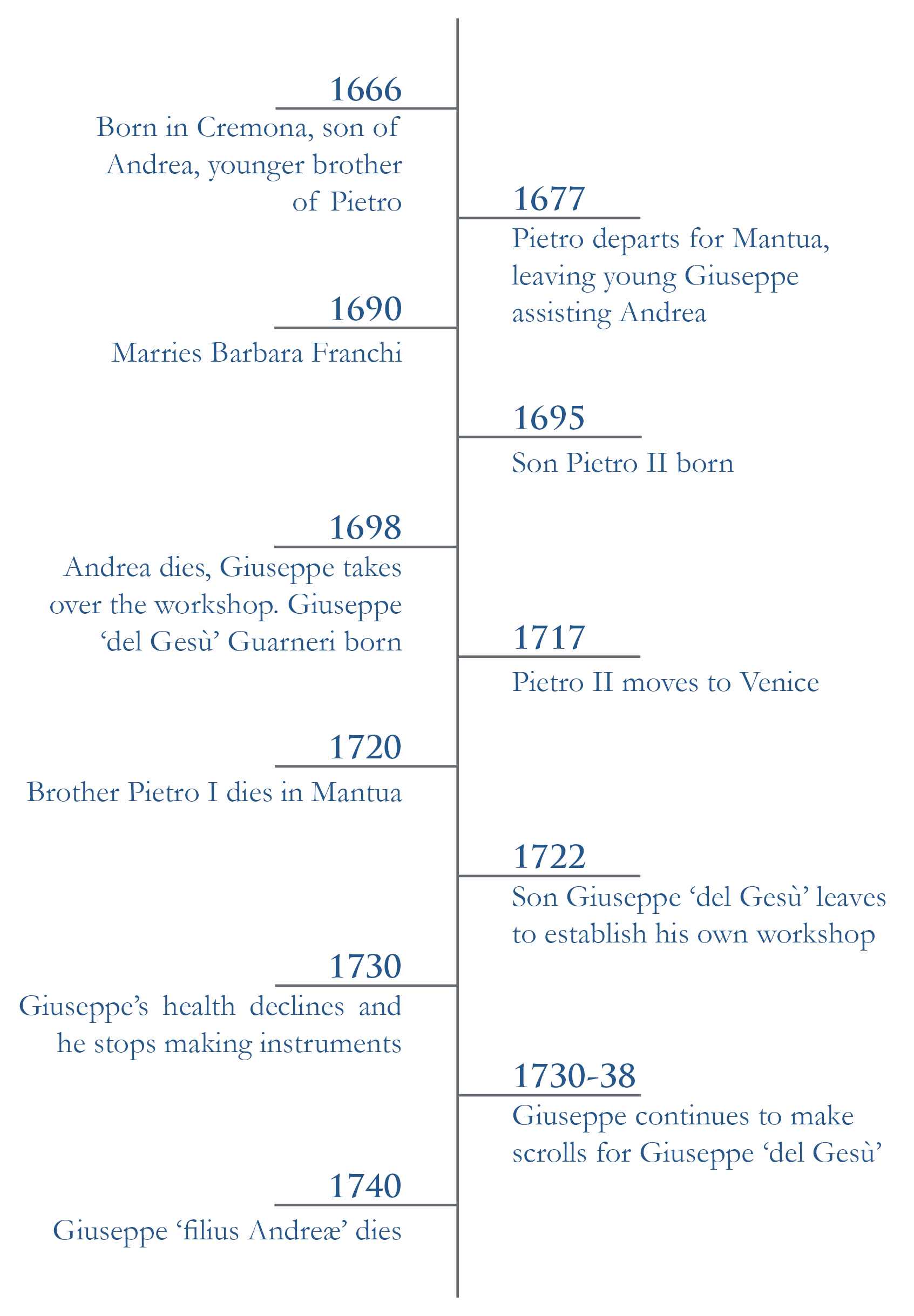 The cello itself was made in 1713, when Guarneri was 47, already three decades into his career, throughout which he shrewdly observed the innovations with which Stradivari was experimenting – developments that are reflected in the varnish and form of this instrument.

John Dilworth writes of it: ‘The model is beautifully proportioned, with generous widths across the bouts, and a distinctive flattened shape across the lower bouts contrasting slightly with the full curve across the upper bouts. It is a more fulsome model than the more slender Stradivari, but the corners are small and slender, almost violin-like. Guarneri’s archings are slightly higher and characteristically slightly pinched, and the wood is of modest appearance, the back made from two pieces of slab-sawn maple with a light figure. The small central pin in the back, characteristic of instruments made by the Amati and Guarneri families, is just about visible on the outside, on the centre joint in the middle bouts.

‘The front is of matched pieces of spruce, pierced by gracefully slender soundholes, also very typical of Guarneri’s style, set quite upright, and with a deep flute extending upwards from the lower wing. Although the head of this cello is a later replacement, the instrument is otherwise a very fine and unaltered example of this great cello maker’s work.’ 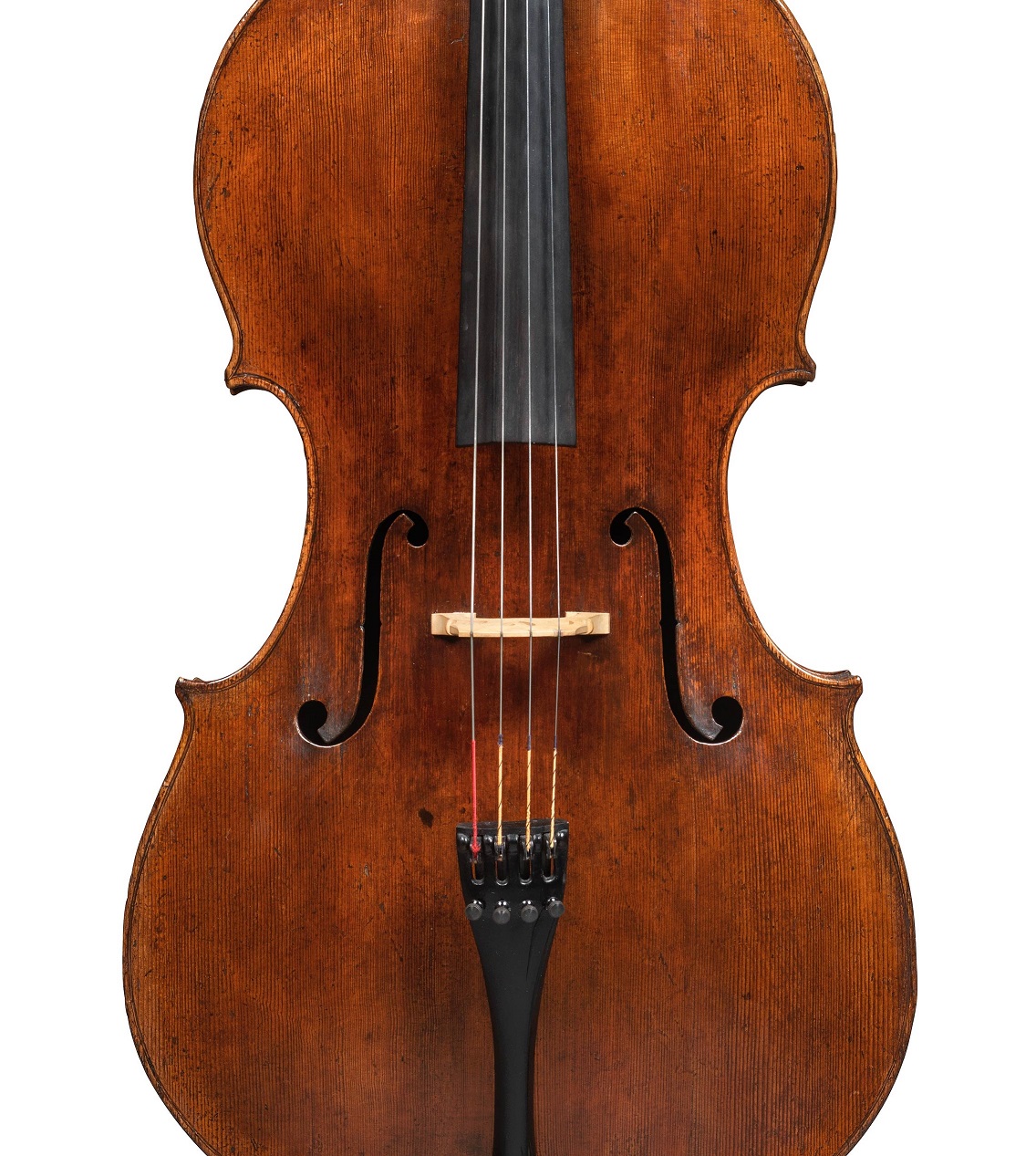 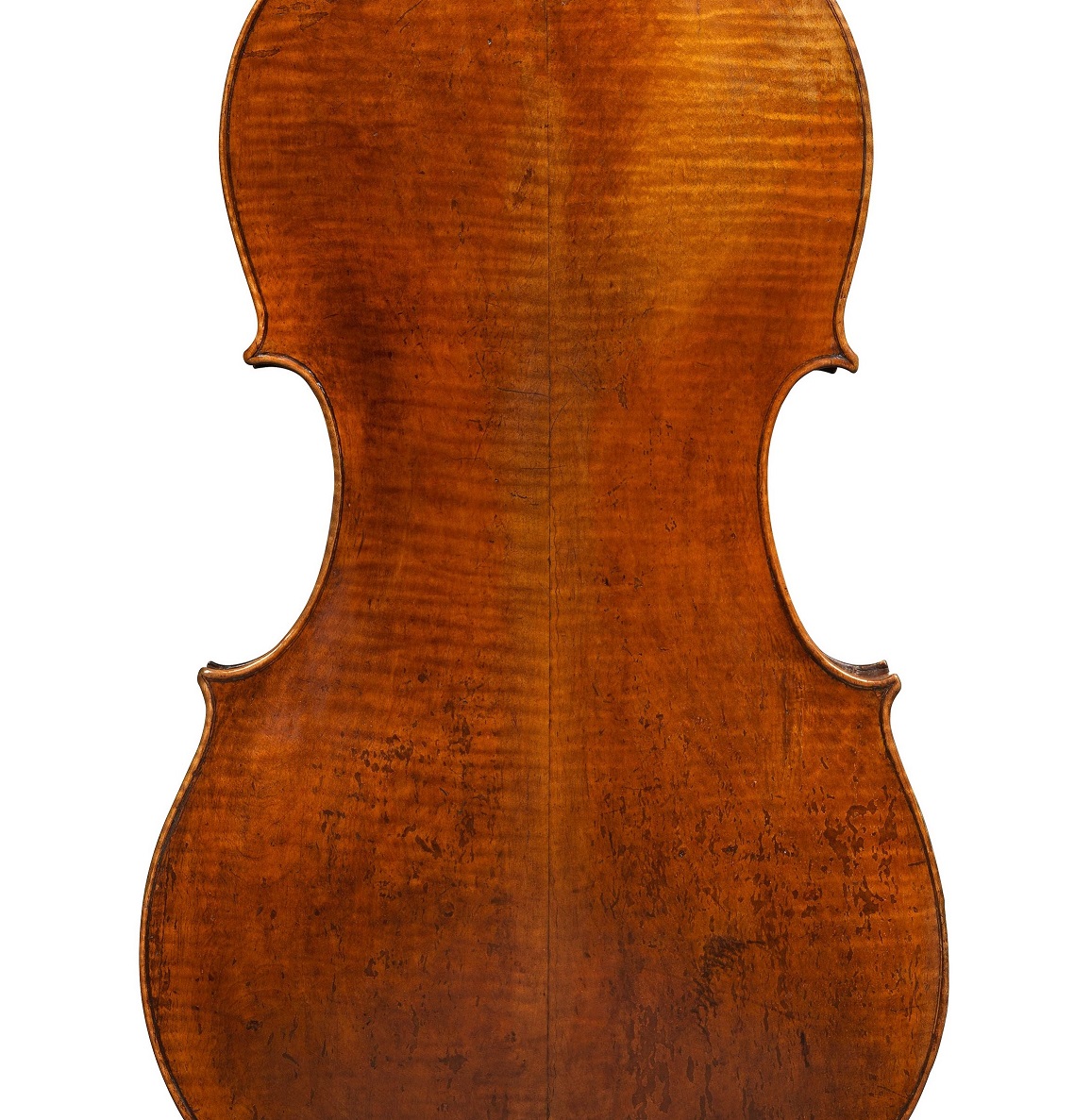