This cello is an extraordinary and fascinating instrument. It is probably unique in form and condition, and of great historical significance in the history of the cello. In Life of Stradivari the Hills point out the importance of Maggini in developing the modern, small-sized cello, but this example made by his teacher, Gasparo da Salò, would indicate that he was not the first to take this course.

There are still many unanswered questions about the work of the great Brescian makers, Gaspar and Maggini, and their predecessors in the city. There is however quite a lot of documentary evidence about their lives. Gaspar da Salò was born in the town from which his name derives as Gaspar Bertolotti in 1540, but was living in Brescia from 1563. He certainly began making violins and violas at a very early period, but unfortunately it was not the habit of Brescian makers to date their work, so we have no real way of understanding the chronology of his output. Examples held in museum collections show that he made many kinds of stringed instruments, including citterns, and viols of many descriptions and variations, and it may be assumed that these instruments were by no means as standardised in form and size as they are today. 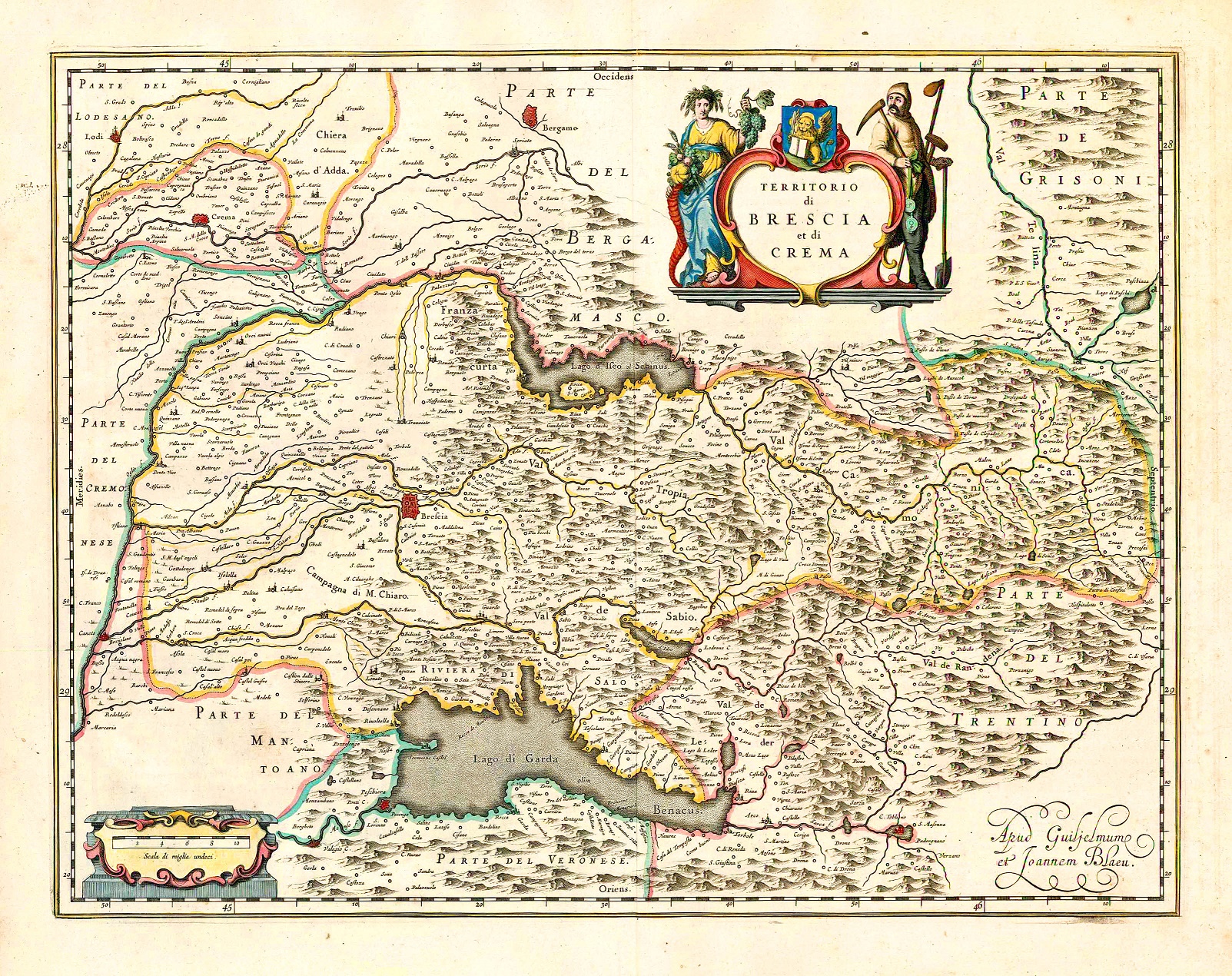 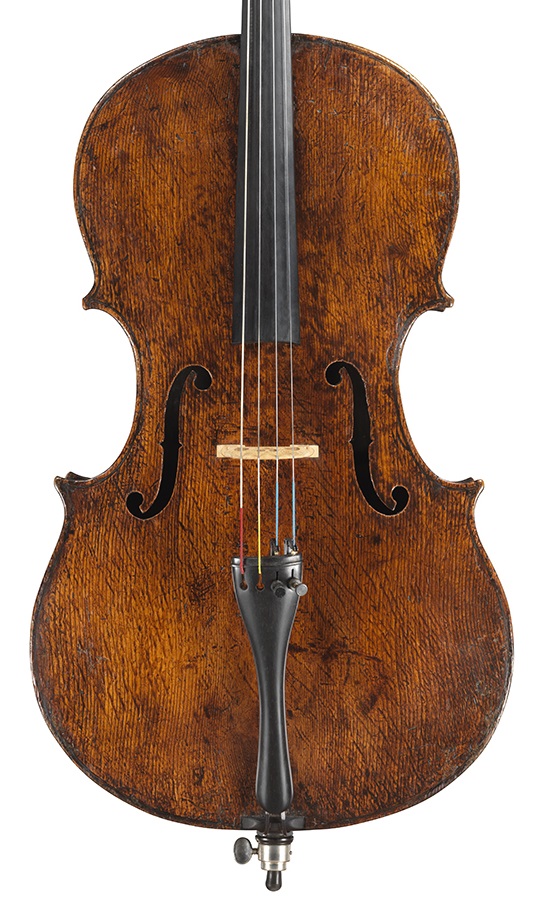 Front of the da Salò cello

This cello, as we call it now, was quite possibly made as a viol. There are no more than half-a-dozen Brescian ‘cellos’ extant, but of those perhaps only one or two retain their original head. This cello has also lost its original scroll, but the surviving examples all seem to be arranged for at least five pegs, implying that they were made in fact as round-backed viols. This Gasparo is particularly interesting in its original, uncut, short form, which measures just over 72cm over the back.

Its construction seems to be rather primitive, at least in comparison to Cremonese instruments of the early period. The arch is flat but rises full in a consistent low curve from the outermost point of the edges, with no channelling at all around the purfling. Inside, the plates are hollowed out with a steep concavity around the flanks, which would otherwise be extremely thick in these areas. Like most other surviving Brescian instruments, there was originally no flat platform left for the top and bottom blocks, and patches have subsequently been fitted internally to accommodate more conventional blocks than were originally present. The exterior form also seems a little unsophisticated, following simple arcs that produce a slightly pointed curve at top and bottom, and prominent outwardly projecting corners.

The back is of two pieces of slab cut unfigured hardwood, which is not clearly identifiable. The purfling is of ebony and set well in from the edge, partially on the rise of the arch. The most beautiful aspect of the instrument is the front however, made from stunning pieces of figured spruce.  This particular wood, identified as a local Italian tree grown at low altitude, rather than alpine spruce, also tells a story. It is seen in many of Gaspar’s other instruments, but remarkably never in his violins or violas. He seems to have used it exclusively for citterns and viols, which supports the notion that this is what the cello was intended as. Why he made this differentiation is more difficult to understand, however.

A graph of the dendrochronology for the cello, showing tree rings dating from 1387 to 1477 (courtesy of Peter Ratcliff)

The soundholes are particularly striking, and the most perfect examples of his style. They are large and open in relation to the small scale of the instrument, but very gracefully cut, with the upper and lower holes characteristically of the same size, and the nicks aligned opposite each other. There is also a shallow chamfer cut along the inner edges, lightening the overall effect of the form. There is no fluting to the wings at all, and the soundholes sit on the crest of the full curve of the arch rising from the outermost edge. The arch of the front is considerably lower than that of the back, but some distortions have inevitably arisen over the course of four centuries. The varnish lying beneath the accumulated patina of this extraordinarily long history is a surprisingly gentle pale gold, but the impression of depth and age is beautiful, and lends great dignity to this remarkable instrument. 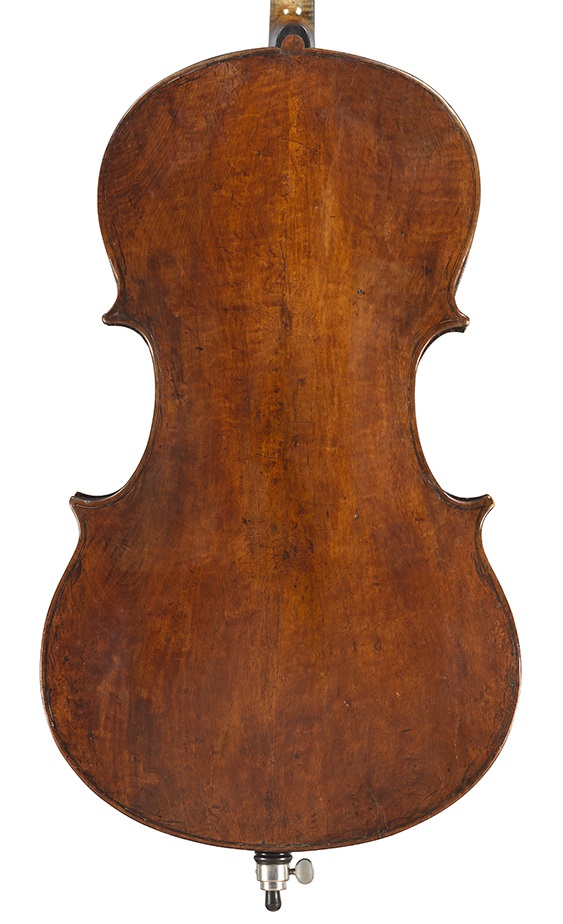 Back of the da Salò cello

To view further information on this cello, please click here.