An interview with Ingles and Hayday 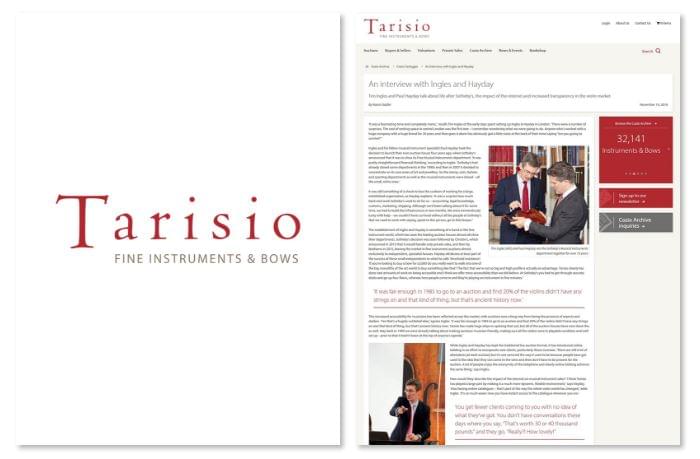 Tim Ingles and Paul Hayday talk about life after Sotheby’s, the impact of the internet and increased transparency in the violin market

‘It was a fascinating time and completely manic,’ recalls Tim Ingles of the early days spent setting up Ingles & Hayday in London. ‘There were a number of surprises. The cost of renting space in central London was the first one – I remember wondering what we were going to do. Anyone who’s worked with a huge company with a huge brand for 20 years and then goes it alone has obviously got a little voice at the back of their mind saying “are you going to survive?”’

Ingles and his fellow musical instrument specialist Paul Hayday took the decision to launch their own auction house four years ago, when Sotheby’s announced that it was to close its Fine Musical Instruments department. ‘It was pretty straightforward financial thinking,’ according to Ingles. ‘Sotheby’s had already closed some departments in the 1990s and then in 2007 it decided to concentrate on its core areas of art and jewellery. So the stamp, coin, fashion and sporting departments as well as the musical instruments were closed – all the small, niche ones.’

It was still something of a shock to lose the cushion of working for a large, established organisation, as Hayday explains: ‘It was a surprise how much back-end work Sotheby’s used to do for us – accounting, legal knowledge, customs, marketing, shipping. Although we’d been talking about it for some time, we had to build the infrastructure in two months. We were tremendously lucky with help – we couldn’t have survived without all the people at Sotheby’s that we used to work with saying, speak to this person, go to that lawyer.’

The establishment of Ingles and Hayday is something of a trend in the fine instrument world, which has seen the leading auction houses almost all close their departments. Sotheby’s decision was soon followed by Christie’s, which announced in 2013 that it would handle only private sales, and then by Bonhams in 2015, leaving the market in fine instrument auctions almost exclusively to independent, specialist houses. Hayday attributes at least part of the success of these small independents to what he calls ‘threshold resistance’: ‘If you’re looking to buy a bow for £5,000 do you really want to walk into one of the big monoliths of the art world to buy something like that? The fact that we’re not so big and high profile is actually an advantage. Tarisio clearly has done vast amounts of work on being accessible and I think we offer more accessibility than we did before. At Sotheby’s you had to get through security desks and go up four floors, whereas here people come in and they’re playing an instrument in five minutes.’

‘It was fair enough in 1985 to go to an auction and find 20% of the violins didn’t have any strings on and that kind of thing, but that’s ancient history now.’

This increased accessibility for musicians has been reflected across the market, with auctions now a long way from being the preserve of experts and dealers. ‘Yes that’s a hugely outdated idea,’ agrees Ingles. ‘It was fair enough in 1985 to go to an auction and find 20% of the violins didn’t have any strings on and that kind of thing, but that’s ancient history now. Tarisio has made huge steps in opening that out, but all of the auction houses have now done this as well. Way back in 1999 we were already talking about making auctions musician-friendly, making sure all the violins were in playable condition and well set up – prior to that it hadn’t been at the top of anyone’s agenda.’

While Ingles and Hayday has kept the traditional live-auction format, it has introduced online bidding in an effort to incorporate new clients, particularly those overseas. ‘There are still a lot of attendants [at each auction] but it’s not rammed the way it used to be because people have got used to the idea that they can come to the view and then don’t have to be present for the auction. A lot of people enjoy the anonymity of the telephone and clearly online bidding achieves the same thing,’ says Ingles.

How would they describe the impact of the internet on musical instrument sales? ‘I think Tarisio has played a large part by making it a much more dynamic, flexible environment,’ says Hayday. ‘Also having online catalogues – that’s part of the way the whole violin world has changed,’ adds Ingles. ‘It’s so much easier now you have instant access to the catalogue wherever you are.’

You get fewer clients coming to you with no idea of what they’ve got. You don’t have conversations these days where you say, “That’s worth 30 or 40 thousand pounds” and they go, “Really?! How lovely!”

The internet has increased market transparency too, they agree. ‘I think it’s the nature of communications these days – you can find out everything on the internet,’ says Hayday. ‘A hundred years ago you would just go to the local person in the local town, because the effort involved in going elsewhere or even organising photos of the instrument would be enormous, but everything is instantaneous now and that has changed the dynamics of the whole thing. There’s no going back from that.’

Ingles adds: ‘I suppose it gives people more confidence that they can access quite a lot of information online. You get fewer clients coming to you with no idea of what they’ve got. You don’t have conversations these days where you say, “That’s worth 30 or 40 thousand pounds” and they go, “Really?! How lovely!” It just doesn’t happen because people will have Googled and therefore they know roughly what their violin is worth.’

Overall Ingles and Hayday are optimistic about the future of fine instrument auctions. ‘I think the market is very healthy,’ declares Ingles. ‘It is getting fussier and has been for some time, so that when you do get something quite good it doesn’t just make an auction record, but sets a record that’s surprising in the retail trade as well. That’s the great joy of auctions.’