‘Croall, McEwen’ Stradivarius violin, worth £2m, to be auctioned 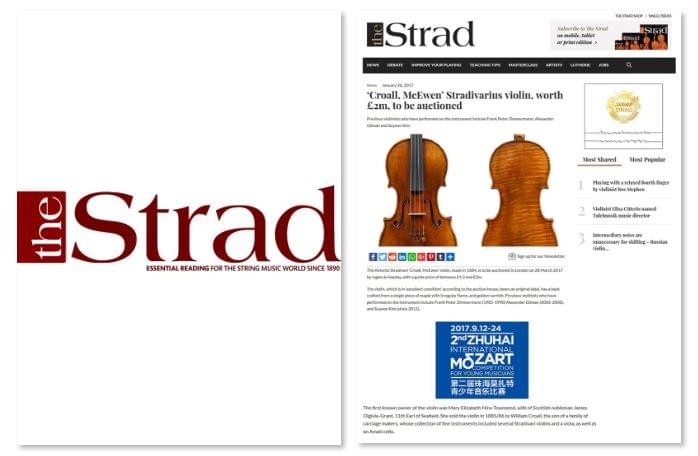 Previous violinists who have performed on the instrument include Frank Peter Zimmermann, Alexander Gilman and Suyeon Kim

The violin, which is in ‘excellent condition’ according to the auction house, bears an original label, has a back crafted from a single piece of maple with irregular flame, and golden varnish. Previous violinists who have performed on the instrument include Frank Peter Zimmermann (1985-1990) Alexander Gilman (2006-2008), and Suyeon Kim (since 2011).

The first known owner of the violin was Mary Elizabeth Nina Townsend, wife of Scottish nobleman James Olgivie-Grant, 11th Earl of Seafield. She sold the violin in 1885/86 to William Croall, the son of a family of carriage makers, whose collection of fine instruments included several Stradivari violins and a viola, as well as an Amati cello.

When Croall died in 1906, the violin was sold to his friend and fellow collector Frederick Smith, and thereafter to violin dealers W.E. Hill & Sons, who in turn sold the instrument to another Scotsman, R.F. McEwen, in 1908 for £553.

Frank Peter Zimmermann used the violin as his principal performing instrument from 1985 to 1990, on loan from the Westdeutsche Landesbank of Düsseldorf – all of his recordings for EMI Classics during this period were performed on the violin.