Return to spender: why it is time to splash out again 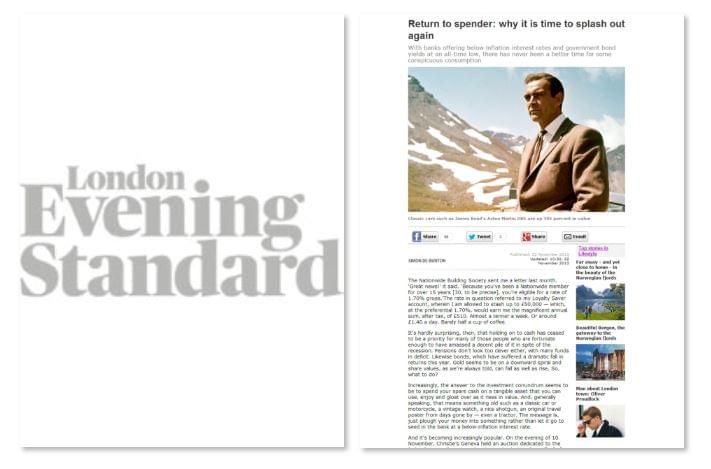 The Nationwide Building Society sent me a letter last month. ‘Great news!’ it said. ‘Because you’ve been a Nationwide member for over 15 years [30, to be precise], you’re eligible for a rate of 1.70% gross.’The rate in question referred to my Loyalty Saver account, wherein I am allowed to stash up to £50,000 — which, at the preferential 1.70%, would earn me the magnificent annual sum, after tax, of £510. Almost a tenner a week. Or around £1.40 a day. Barely half a cup of coffee.

It’s hardly surprising, then, that holding on to cash has ceased to be a priority for many of those people who are fortunate enough to have amassed a decent pile of it in spite of the recession. Pensions don’t look too clever either, with many funds in deficit. Likewise bonds, which have suffered a dramatic fall in returns this year. Gold seems to be on a downward spiral and share values, as we’re always told, can fall as well as rise. So, what to do?

Increasingly, the answer to the investment conundrum seems to be to spend your spare cash on a tangible asset that you can use, enjoy and gloat over as it rises in value. And, generally speaking, that means something old such as a classic car or motorcycle, a vintage watch, a nice shotgun, an original travel poster from days gone by — even a tractor. The message is, just plough your money into something rather than let it go to seed in the bank at a below-inflation interest rate.

And it’s becoming increasingly popular. On the evening of 10 November, Christie’s Geneva held an auction dedicated to the Rolex Daytona Cosmograph wristwatch, designed specifically for racing drivers, to mark the model’s 50th anniversary. Fittingly, 50 watches were offered — and all 50 sold, for a combined total of £8.2 million. The star of the show was a unique example of the model, known as the Paul Newman (because the actor, who was a racing fanatic, always wore one), which quadrupled expectations to fetch £673,000.

That sum was exceptional, but the Daytona Cosmograph has proved an impressive investment, even at lower price levels. A decade ago, a Paul Newman version could have been bought for around £20,000. Now, good ones fetch from £70,000 to £200,000, and the above example at Christie’s set a new record.

Similarly, when specialist car auctioneer RM offered a 1967 Ferrari 275GTB/4 NART Spider at its August sale in Monterey, California, it took just minutes for the bidding to race from an opening bid of £6.2 million to a Ferrari world auction record, including buyer’s premium, of £17.1 million — some way short, however, of the absolute world record auction price for a car, set by Bonhams in July when it sold a 1954 Mercedes-Benz W196 once raced by Juan Manuel Fangio for £19.6 million.

These are both extreme examples of the very best collectable items making huge sums — but people are investing in things at all levels, particularly those that they can have fun with.

Collectables such as cars, watches, stamps, wine, coins and guns are, generally speaking, not just ‘fun’ to own but ‘fungible’, or mutually interchangeable — one MGB sports car is likely to be worth more or less the same as any other, just as two identical coins will be worth the same, or two bottles of wine created in the same year at the same château. There’s an easily defined benchmark of value.

Paintings and fine furniture are a little different because they are generally one-offs — although there are, for example, four existing versions of Edvard Munch’s The Scream, one of which achieved a record £74 million at auction last year. It has just been eclipsed as the world’s most expensive work of art sold at auction by Francis Bacon’s Three Studies of Lucian Freud, which fetched £88.5 million earlier this month. The highest price ever was for Cézanne’s The Card Players, sold privately to Qatar in 2012 for a rumoured £155.5 million.

All of the above categories — plus that most fungible asset of all, gold — were included in estate agency Knight Frank’s ‘investments of passion’ survey this spring. Interestingly, the report cited classic cars as the second best-performing asset in the ten years to the third quarter of 2012, shooting up by an impressive 395 per cent and coming second only to gold, which rose by a staggering 434 per cent during this period. However, gold has recently lost some of its lustre, falling by 23 per cent in the year to July 2013.

Understandably, some auction houses and specialist dealers quickly made hay out of this, making sure their target audience knew all about it. Let’s face it, the current strength of the market does make classic cars (and motorcycles) seem like a very safe bet indeed.

But before you indulge in a bidding frenzy at the next available car/motorcycle/watch sale, dig a little deeper into the figures cited in the ‘passion’ survey. Cars up 395 per cent? Actually, what Knight Frank means is that the very best cars tracked by the independent HAGI Classic Car Index have risen by that amount — in other words, your blue-chip Ferraris, Astons, Porsches and the like. And their super-rich buyers don’t really mind what happens anyway, since they only invest an average of four per cent of their wealth in such assets.

Most of the more humble classic cars, however, have not risen by anything like that amount — and any increase in value must also take into account the costs of restoration, maintenance and storage. The last in particular can be significant, as many people who buy old cars purely for investment simply leave them locked away in specialist facilities, which charge up to £100 a week for their services.

Watches, of course, are considerably easier to store (even if they require specially adapted boxes), as are, surprisingly, violins — another area that can provide an impressive return on investment.

Tim Ingles, who worked as a musical instruments specialist at Sotheby’s for 19 years before co-founding the auction and consultancy business Ingles & Hayday at the beginning of 2013, cites the so-called Lady Blunt Stradivarius as a demonstration of how the value of the best violins has risen over the decades.

‘The Lady Blunt established a world auction record in 2011 when it sold for £9.8 million,’ he explains. ‘It was recorded as selling for £84,000 in 1971, so that represents a consistent annual return on investment of 12 per cent over a 32-year period. But you don’t need to spend millions on a Stradivarius or a Guarnerius in order to make a decent investment in a violin. Around £30,000 is probably the minimum feasible amount, and that will get you a good “modern” instrument [ie, made after 1860], which has a good chance of rising in value. And you can simply store it at home, as long as it’s kept away from direct heat and sunlight.’

Those looking for a little more excitement from their investments might also consider sporting guns. According to specialist and auctioneer Gavin Gardiner, this particular ‘boy’s toy’ has proved a popular area to park money in recent years.

‘The general lack of conventional investment opportunities has provided lots of people with exactly the excuse they were looking for to spend their pocket money,’ says Gardiner. ‘With interest rates being so low, they can justify liberating their savings to buy something which, in the worst-case scenario, will provide them with no return on investment but lots of fun — but, in the best-case scenario, will provide a significant return on investment as well as lots of fun. There are plenty of people buying guns at £30,000 and above, and even some spending up to £200,000. But, perhaps surprisingly, it is in the lower price areas, around the £1,000 to £2,000 mark, where we are seeing the most activity.

‘If I had £20,000 to play with, I’d be tempted to put it into a good shotgun by one of the great British makers such as Purdey, Boss or Holland & Holland. As with all areas of collecting, quality and condition are key to value — but buy a great gun in great condition and it’s difficult to see how you could go wrong,’ he adds.

Simon Khachadourian of London’s Pullman Gallery, which specialises in 20th-century objets de luxe ranging from Art Deco cocktail accoutrements to smoking memorabilia, automobile art and period desk accessories, concurs with Gardiner on the matter of quality: ‘We have certainly seen an increase in cus-tomers buying for investment rather than simply for pleasure — although the two are not mutually exclusive — but there is no doubt that people are giving careful consideration to what they spend their money on, just as they would if they were putting it into stocks and shares, property or anything else from which they hope to realise a decent return.

‘A tangible object that is, preferably, the best of its kind and in finite supply — be that a cocktail shaker, the propeller from a vintage aircraft, a motoring poster or a piece of vintage Louis Vuitton luggage — has simply become a more reliable place to put your cash than a savings account,’ says Khachadourian. ‘And let’s face it, a beautiful object is a whole lot nicer to look at than a bank statement.’