The Rosenberg Collection Part I – Cremona

The collection of instruments gathered together by Norman Rosenberg over a 70-year career as a dealer and connoisseur tells us a great deal about the nature of collecting itself, and what a collection actually means. In this case, the instruments Rosenberg kept to himself appear to be a reference library of the great, the good, and the intriguing; a wide-arching group of instruments that notably spans the entire classical period of Cremona, but also other distinctive schools of makers outside that narrative.

There are many outstandingly pure examples, but also fascinating and revealing glimpses into the work of lesser-known makers who have contributed in their own way to the history of lutherie. How many of these violins remained with Rosenberg purely as the result of his constant trading and were still awaiting the right buyer, and how many were his own choices, too hard to part with, is unknowable. Nevertheless, the collection does now offer to us, at least briefly in the saleroom of Ingles & Hayday, opportunities to enjoy and appreciate known masters, and explore other diverse and more obscure paths, as it must have done to Rosenberg himself. 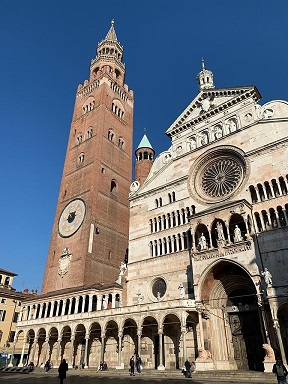 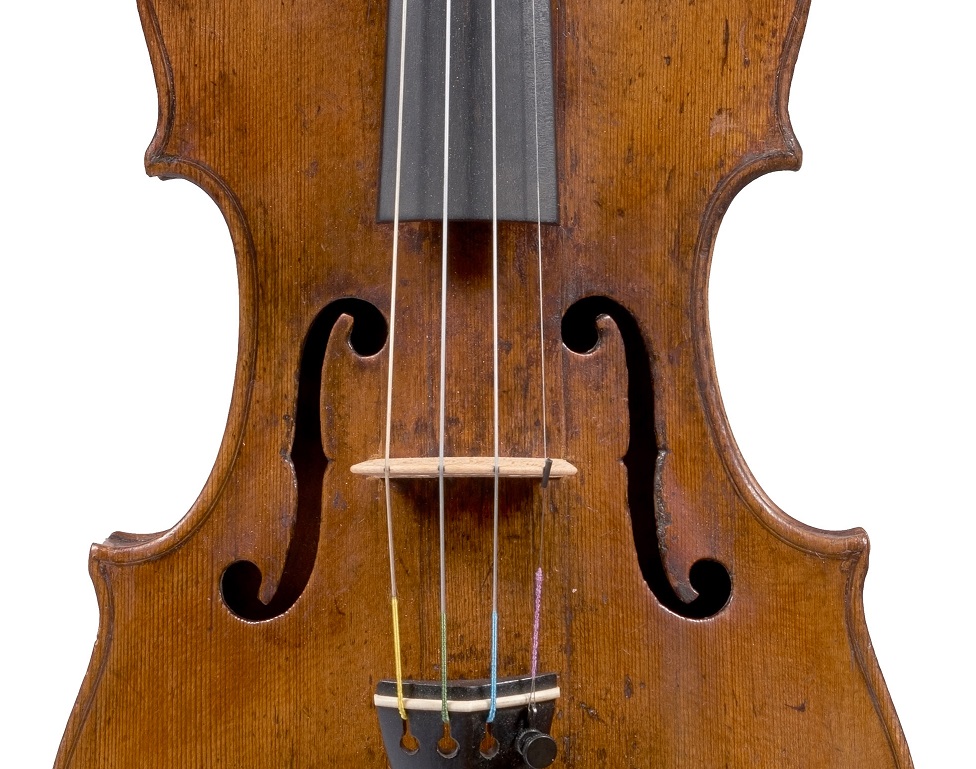 Front of the Andrea Amati violin

The most obvious group of instruments within the collection is that which, with no exaggeration, encompasses the entire classical period of Cremona. It is a wonderful selection which begins at the beginning, as it were, with a venerable Andrea Amati and includes a Stradivari, both of which appear to be previously unrecorded instruments; both are enormously valuable additions to the catalogues. To discover one more Andrea Amati to add to the mere twenty or so known examples is exceptionally significant. The Rosenberg violin is made on Andrea’s smaller model, and with relatively modest materials, although dendrochronological analysis has revealed what is possibly the oldest violin wood so far discovered, with grains of spruce laid down in the 13th century.

The scroll unfortunately is not original, but part of the fascination of the violin is that all the distinctive aspects of Cremonese violin making technique that determined and defined the characteristics of every instrument made in the city over the following two centuries are already present in the construction of this violin; techniques devised and practiced by Andrea, the father of violin-making.

Chronologically, the next remarkable instrument is an Andrea Guarneri. Guarneri was the pupil of Andrea Amati’s grandson, Nicolò, and this violin is dated 1682, representing the passage of already well over a century of violin making in Cremona, and the close lineage of makers in the city. This is a stunning, beautifully preserved example, following all the principles of Amati’s design, but on a slightly reduced form.

The back is a slab cut single piece of native Italian oppio maple, with the characteristic deep, narrow flame of that variety, which reflects beautifully under the fine golden varnish. The varnish itself is in a very fine state, and the rich texture and fire within the subtle colouration demonstrates exactly why Cremonese varnish has been so obsessively admired and investigated over time. What is so interesting about Andrea Guarneri’s work as a whole, typified in this instrument, is how his own comparatively rugged style developed from the precision of his teacher, Nicolò Amati, and ultimately led to the almost impressionistic and improvisatory work of his own grandson, Giuseppe Guarneri ‘del Gesù’. 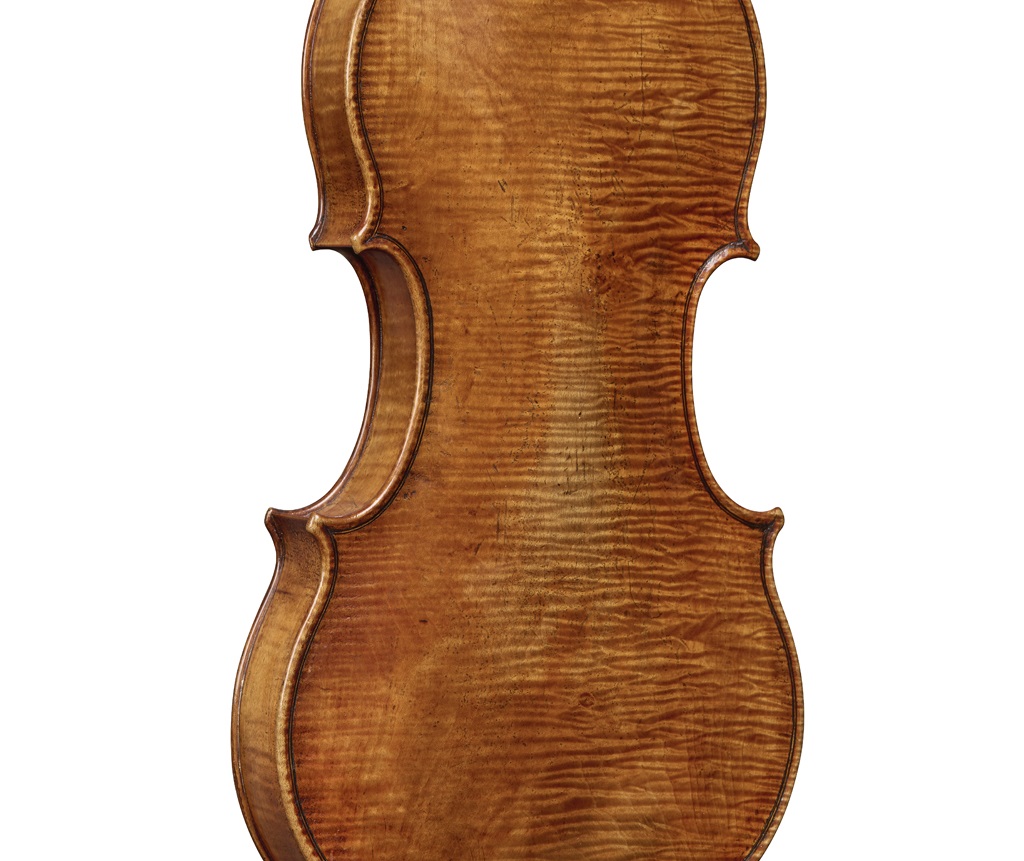 Back of the Andrea Guarneri violin 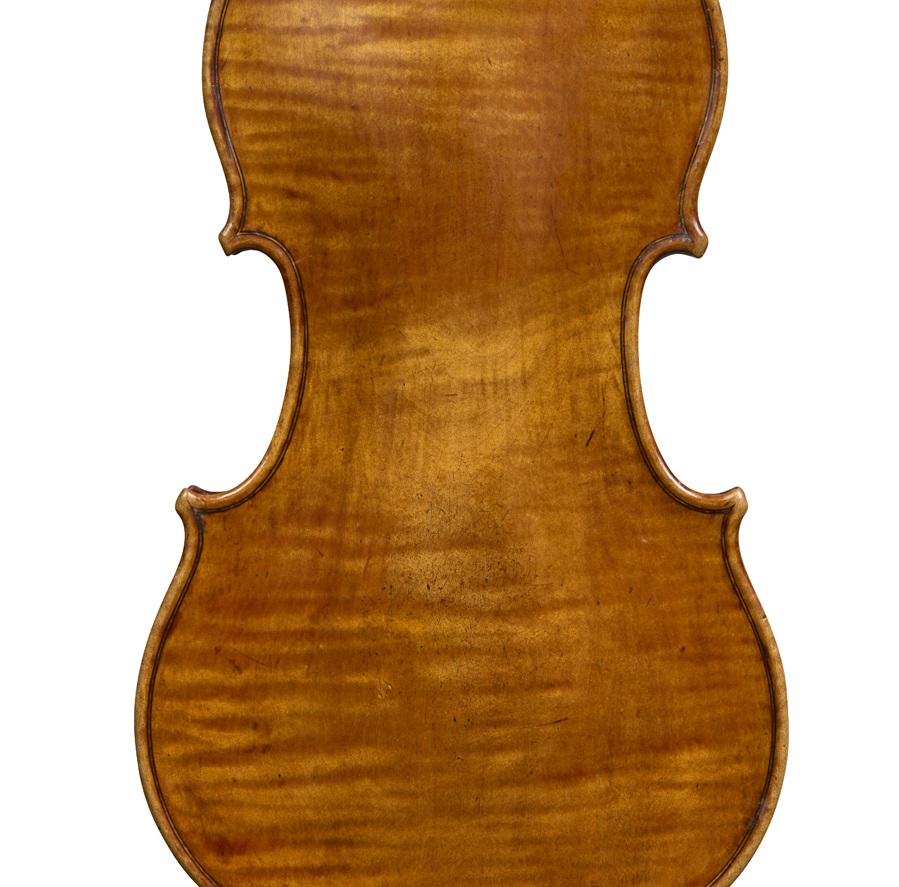 Back of the Antonio Stradivari violin

These two instruments lead on to perhaps the most exciting instrument of the collection, the Stradivari. This violin, although it has no known history, being otherwise undocumented and unknown, has a particularly interesting story to tell. Although all parts are attributable to Antonio Stradivari, there are many different elements within it. The back, from the period 1685, was made, astonishingly, at much the same time as the Andrea Guarneri, but offers the strong contrast in style that shows Stradivari’s gift as an innovator and an independent mind within the strong Cremonese tradition.

The form is quite original to Stradivari, unlike any of his predecessors who repeatedly used the same Amati pattern. In proportion it conforms to his ‘P’ mould (ms 44), but it is unusually, possibly uniquely, large for the period in length and width. Whether or not it was made as an experiment in the development of the Long Patterns, which appeared in the 1690s, is impossible to say. Where this becomes more interesting is that the front appears to be from a slightly later period, around 1692, and must have been made by Stradivari to fit the instrument; whether to replace the damaged original or to complete an earlier, unfinished instrument is again, impossible to say. To add to the intrigue, the scroll is again of a different period, being a finely preserved and delicate example from around 1670.

'Zosimo is of significance in being the only active maker in Cremona for a few brief years around 1760.'

The Cremonese history contained in the Rosenberg Collection then leaps ahead several decades, to another fascinating instrument attributed to the circle of Michele Angelo Bergonzi. He, with his father Carlo, occupied the Stradivari workshop after the death of Antonio, completing unfinished instruments that remained there. Yet the instruments Michele Angelo himself made reflect the influence of del Gesù far more than his experience in the Stradivari shop, and there has been more than one occasion when his work has been mistakenly identified as Guarneri, and vice-versa.

Bergonzi died young in 1758, but another chapter in the Cremonese story, as told by the Rosenberg collection, is a striking and virtually unblemished violin bearing a label of Lorenzo Storioni dated 1796. This belongs to a recognised group of instruments sometimes ascribed to the ‘School of Storioni’, that belong to the last years of the nineteenth century in Cremona, but are clearly distinct in workmanship from those of Storioni himself. A growing body of opinion supports the idea that they are actually the work of Zosimo Bergonzi, the younger brother of Michele Angelo. This violin is relevant to this debate, and can be compared to the only known authentically labelled example of Zosimo’s work, a rather hastily constructed quarter-sized violin of 1775. Zosimo is of significance in being the only active maker in Cremona for a few brief years around 1760, and responsible for passing the tradition, although by this time rather eroded, to his son Nicola Bergonzi. From him, the standard did pass to Storioni, and then to Giovanni Battista Ceruti, who, with his son Giuseppe Antonio, were the last practitioners of this four centuries long craft in Cremona. 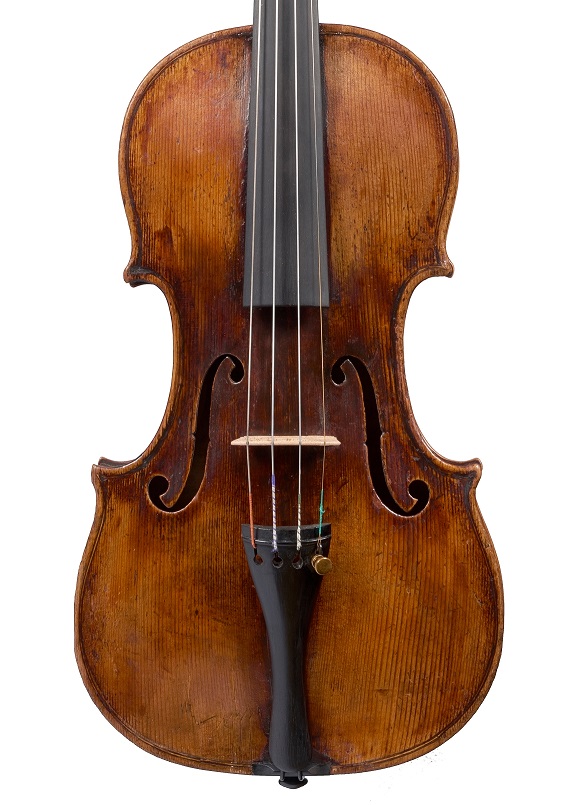 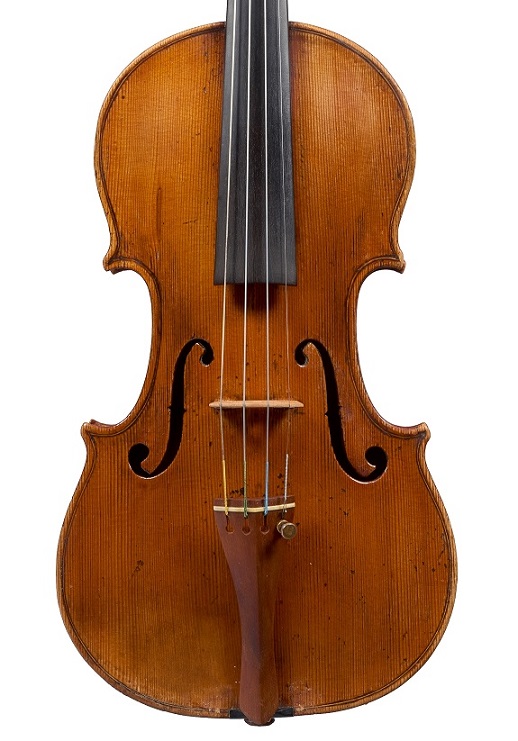 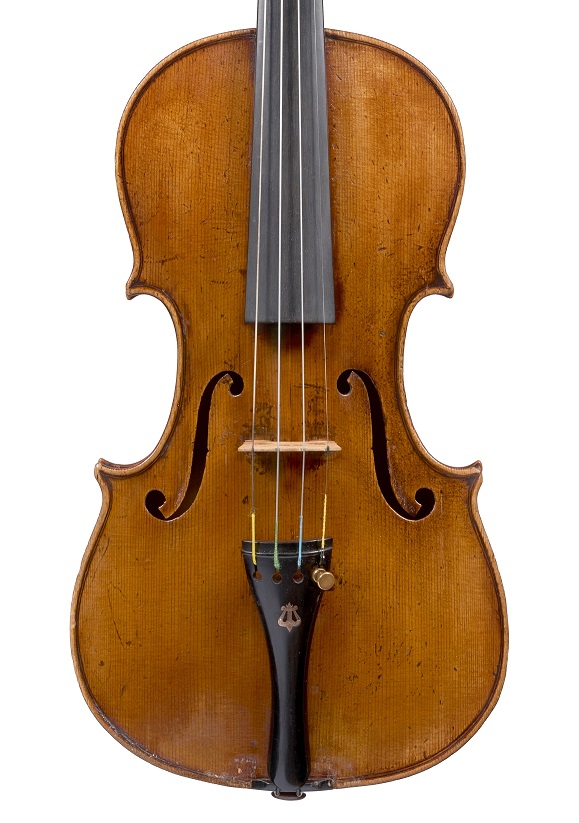 The Cremonese story is brought to its close in this collection by a very fine and definitive Giovanni Battista Ceruti attributed to the period 1810-15. The pristine condition reveals certain markers of his workmanship, from the small ebony pins placed within the purfled margins of the back, to the almost undisturbed covering of pale golden-varnish laid over a slightly grey ground. These two small pins and the pale varnish hark back to the very first period of the Cremona and the genius of Andrea Amati, but even these are different in material ways. All has changed, but the violin itself as Andrea imagined it, has remained profoundly the same. 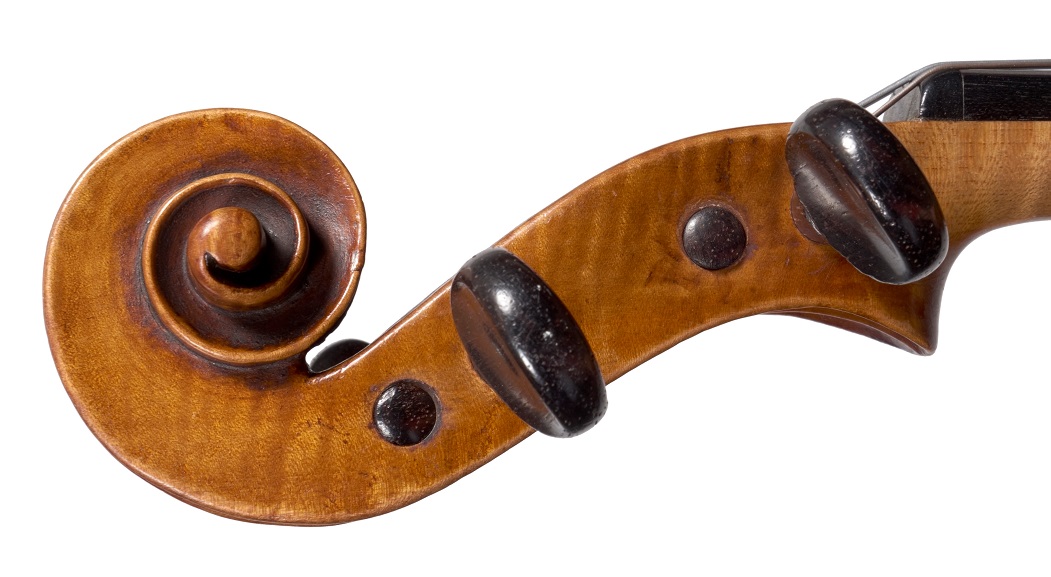 Scroll of the G.B. Ceruti violin

Read Part II – The Milanese Instruments in the Rosenberg Collection