The Violin Makers of Mantua 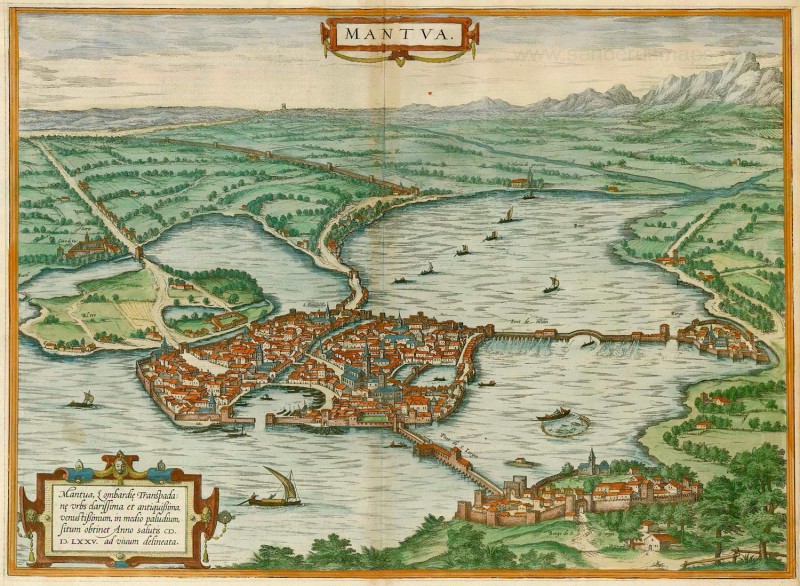 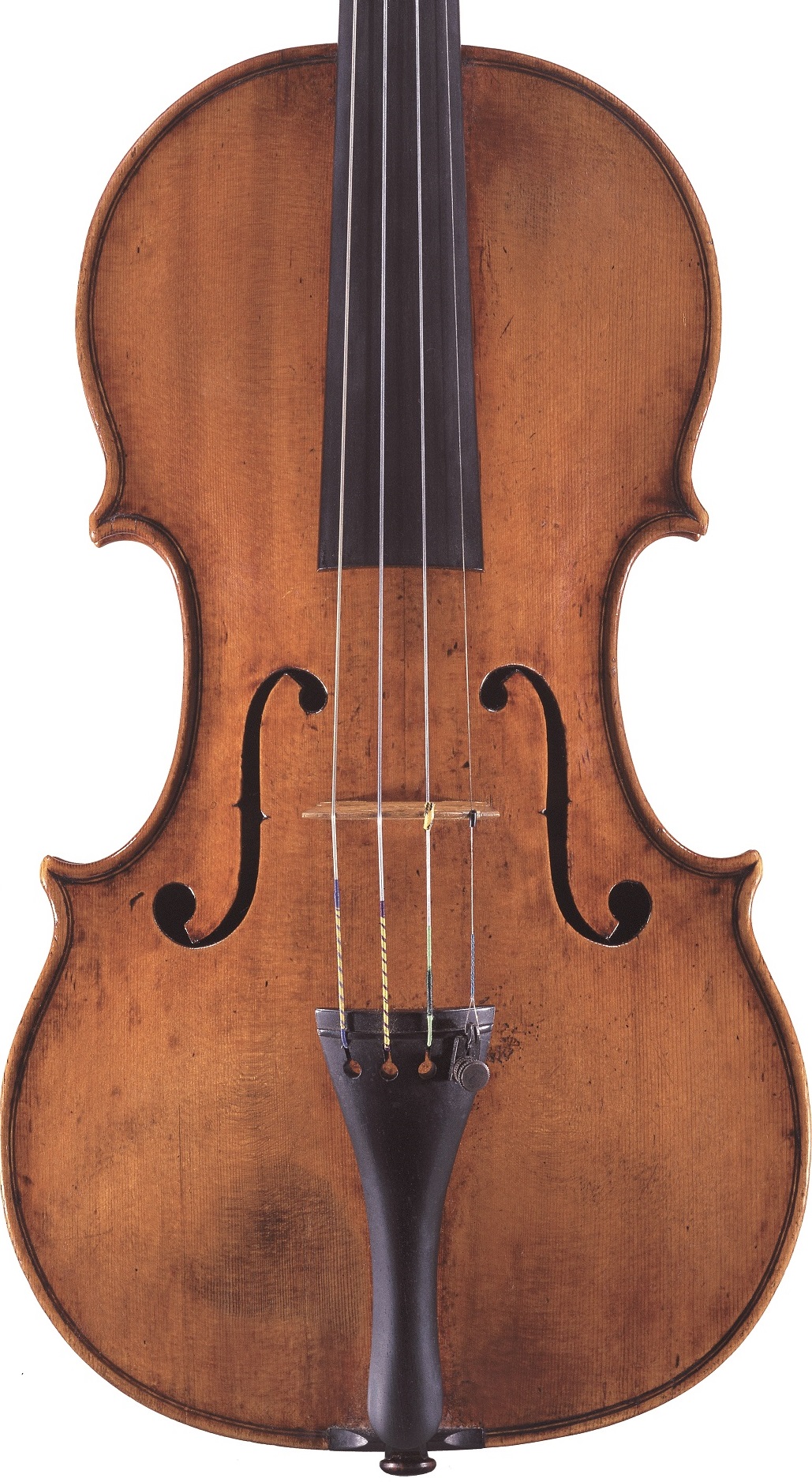 Back of the 'Ex-Birchta', A violin by Pietro Guarneri of Mantua from our Notable Sales 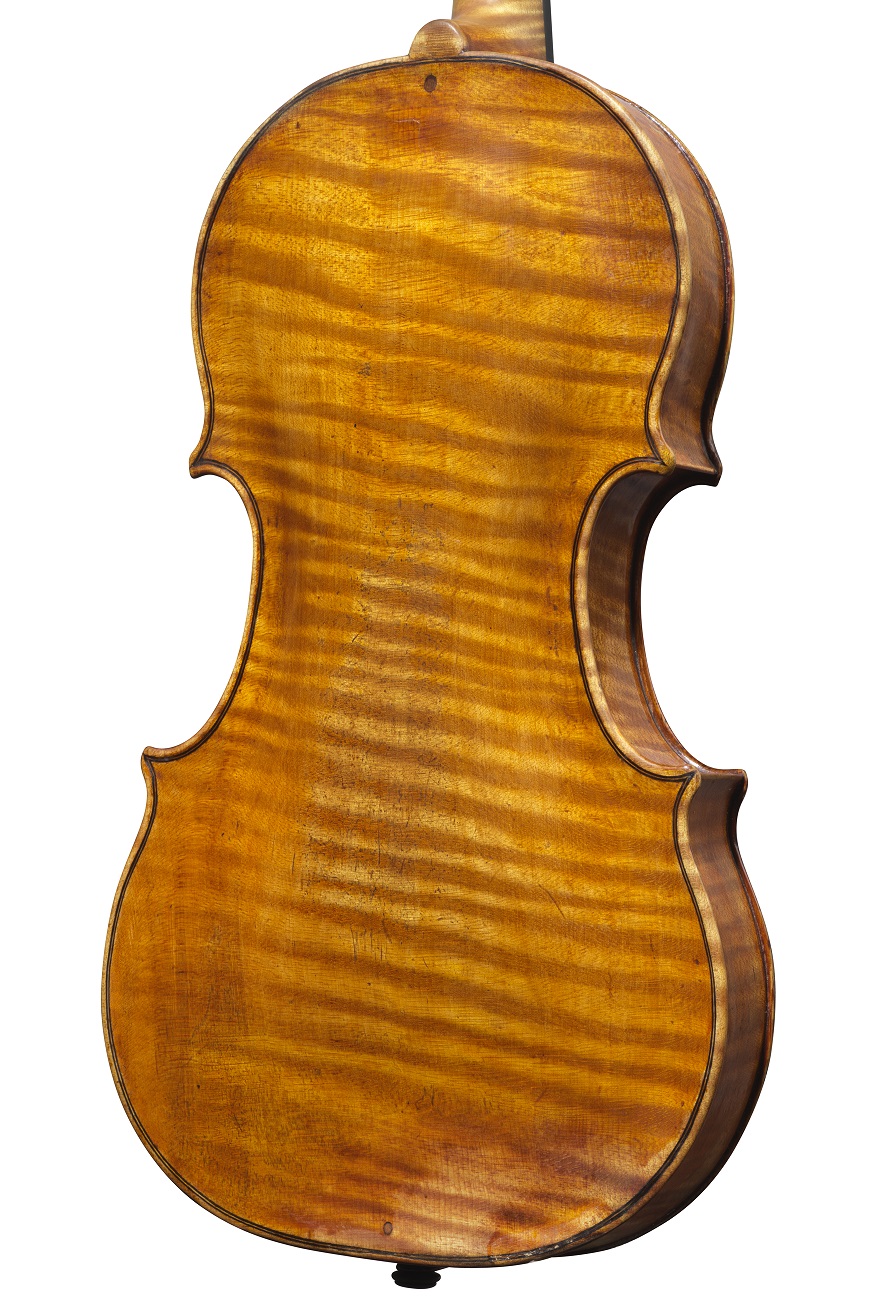 Back of a violin by Camillus Camilli in our forthcoming auction

Mantua in the 18th century was a far cry from the glories of its Gonzaga heyday. The seat of the great patron of renaissance music and art Isabella d’Este, the home of Virgil, of the Cremonese-born Monteverdi and the site of the premiere of his Orfeo and therefore the birthplace of opera, was sacked by the Austrian army in 1630. Plague followed, as it did in nearby Cremona. The old Gonzaga house was replaced by Hapsburgs in 1708, and the great Mantegna masterpieces of the Gonzaga palace were lost to Venice and to the collection of Charles II in England. The somewhat isolated lake-bound and marshy territories of Mantua were not the most salubrious habitation, and the city was hard-put to recruit artists of such calibre in the later years. Peter Guarneri was drawn there by a contract as a violinist in the court of Ferdinando Carlo Gonzaga in around 1683, and occupied the role of luthier there until his death in 1720.

His influence on succeeding violin makers there was immense, and it would seem that the position of city or court luthier was indeed handed down in individual succession. Only one violin maker ever seems to have worked there at any one time, but the process by which they passed the tradition from one to another is not immediately clear. Camillo Camilli is the best known of those that came after Pietro Guarneri, and his style and technique owes a great debt to him and the Cremonese school, but the two men could not have worked together for any length of time. Camilli was born in about 1704, so could conceivably have served a short apprenticeship with Guarneri from about 1716 as a very young man. His high-arched, almost Staineresque model certainly comes from Guarneri, as does his technique of marking the central point of the back with a small pin, from which in some well-preserved examples, radiating circles can be traced which presumably defined the areas of thickness. This method can be tracked though Cremonese making to the very beginning with Andrea Amati. Pietro was by far the most conscientious craftsman of the Guarneri family, and Camilli was a similarly fastidious maker, with a very delicate approach to detail in the scroll and edges. He is probably best distinguished by the rich yellow varnish he used consistently. It does not seem to match the thicker, softer deeper red of Guarneri, and appears to be entirely his own.

Pietro Guarneri was by far the most conscientious craftsman of the Guarneri family, and Camilli was a similarly fastidious maker

Another maker who does appear at this time is Antonio Zanotti, born in 1695 in nearby Lodi. It is not certain when he came to Mantua, but it is clear that he too learned the Cremonese methods of violin making, with the central pin, morticed linings and by implication, the internal mould.  Intriguingly he might well have acquired the knowledge from another Cremonese maker, Hieronymus Amati II, the son of Nicolò. He left his home city in 1697 as a bankrupt, possibly a result of Stradivari’s growing domination of the craft at the time, and did not return until 1715. The intervening years were spent in Piacenza, from which a few instruments are labelled, and Lodi.

Zanotti’s work is an interesting mixture of influences, a little coarse in workmanship, but with lower, more Stradivarian arching, which may have come from Hieronymus Amati. His varnish also seems to be part-way between Amati, Guarneri and Camilli, in being a soft, golden yellow, sometimes with the deeper orange tint of Guarneri and Amati.

His earliest labelled work is dated around 1720, just after the death of Guarneri, and for a brief period he was the sole professional violin maker in Mantua. Camilli’s labelled work appears from 1730, and in 1731 the two luthiers signed a contractual arrangement to keep their businesses separate but non-competitive. Zanotti died only a few years later in 1734. Evidently the two makers were engaged with each other, but it is still by no means clear whether they were master and pupil, or simply successive occupants of the post of violin maker to the city of Mantua, with a common heritage in the work of Pietro Guarneri. 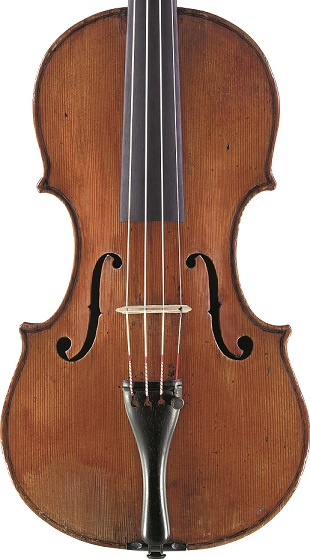 Front of a violin by Antonio Zanotti from our Notable Sales

Balestrieri's instruments are most definitely players’ instruments, suited for and most desirable for modern performance 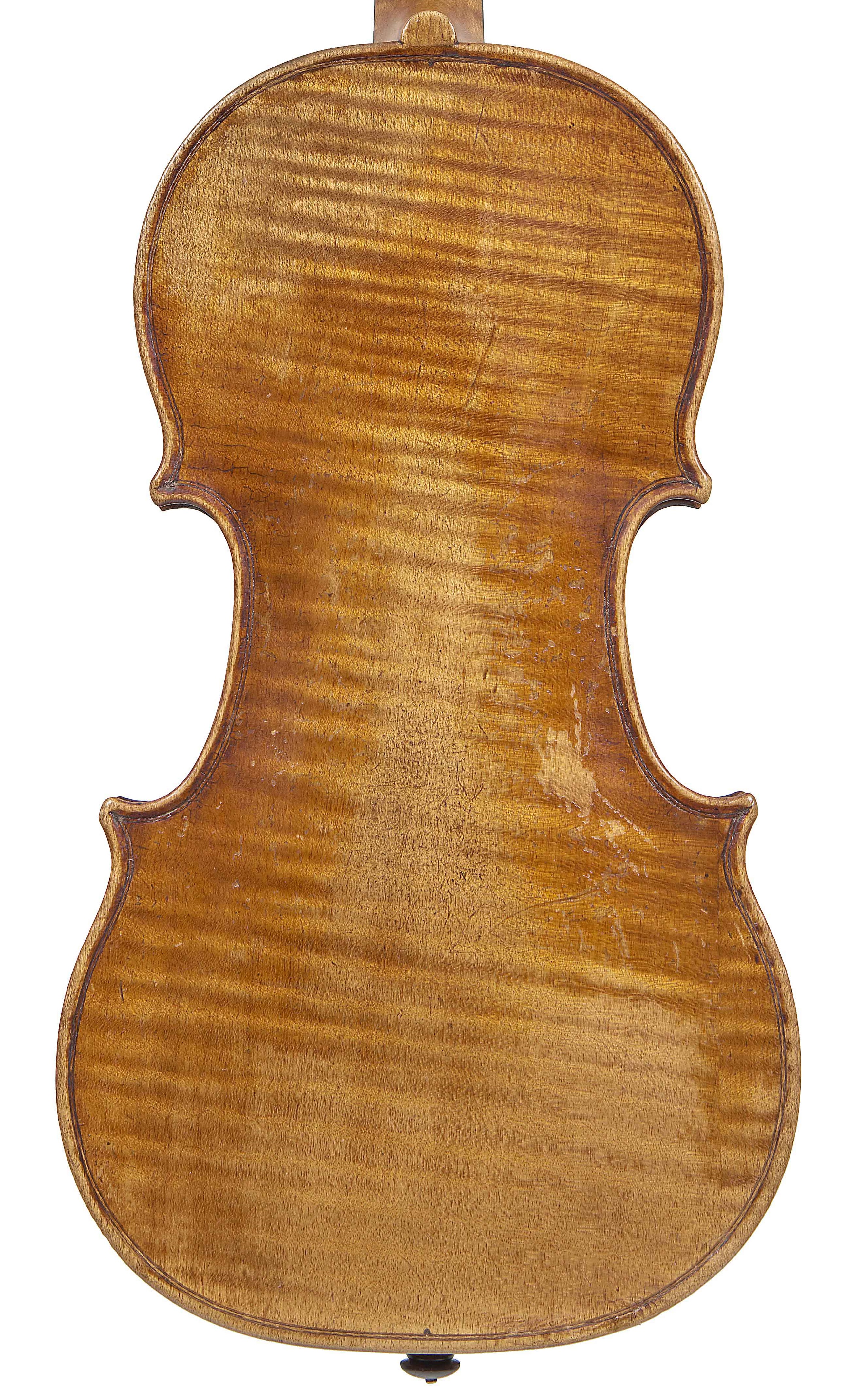 Camilli worked until his death in 1754, with remarkable consistency and industry. His work is both clearly recognisable and frequently encountered. His successor, and again it is not absolutely clear that he was actually his pupil, was Tommaso Balestrieri.

Balestrieri has confounded attempts to find his birthplace, but he was almost certainly from the region of Cremona, Piacenza and Mantua, and described himself as ‘Cremonensis’ on his labels. Another Balestrieri, Joseph, appears in the court records of Madrid from 1751, described as a wood-turner and instrument maker, the son of ‘Francisco of Piacenza’, but no other evidence of the family or its background has been discovered.  Tommaso was born in about 1735, and his label appears in instruments from Mantua in around 1750, when Camilli was nearing the end of his working life, and again marks the linear succession of Mantuan makers.

Although there are points of similarity in their work – the consistent use of the central back pin, and a well-organised Amati model – the mature work of the two makers could not in many ways be further apart. The beautifully-modelled and concentric scroll of Camilli has no equal in Balestrieri’s output, and the edgework of the two shows the extreme between delicate restraint and broad, impressionistic robustness. Balestrieri’s work has an element of del Gesu’s style, and in fact the whole approach that can be found throughout Lombard violin making in the later eighteenth century, in late Bergonzi, Storioni and Ceruti. There is haste in the finish and detail, but an energy in the work that is no impediment to a full, powerful tone. These are most definitely players’ instruments, suited for and most desirable for modern performance, not so much to the critical assessment of craftsmen and connoisseurs.

The two styles are clearly exhibited in two instruments in this auction. The charming Camilli is carefully detailed and well-regulated form in outline, scroll and arching, the heir to Pietro Guarneri. The curious spalted maple, with dark lines running through it, was frequently used by Camilli, and probably came from a locally felled tree. By contrast, the Balestrieri, beautifully preserved with its unpolished, briskly tool-finished surfaces covered with a deeper-toned craquelured varnish, shows his debt to Pietro’s wilder nephew, Giuseppe del Gesù.

After Balestrieri’s death in around 1790, his place was taken by Giuseppe Dall’Aglio, born in 1774. In his work, the Mantuan character becomes most dissolute and almost haphazard, yet still within the tradition. He was the first maker to produce instruments other than violins in the city; none of his predecessors made cellos or violas. He died in 1855, which coincides with the arrival in Mantua of Stefano Scarampella. Scarampella was already a trained violin maker from Brescia, and his technique does not share the Cremonese characteristics of Guarneri, Zanotti, Camilli and Balestrieri, but he clearly found great inspiration in the vigorous style of Balestrieri, and his work sits well among the curiously rich variety of work that came from the marshy confines of Mantua over this fascinating two hundred year history. 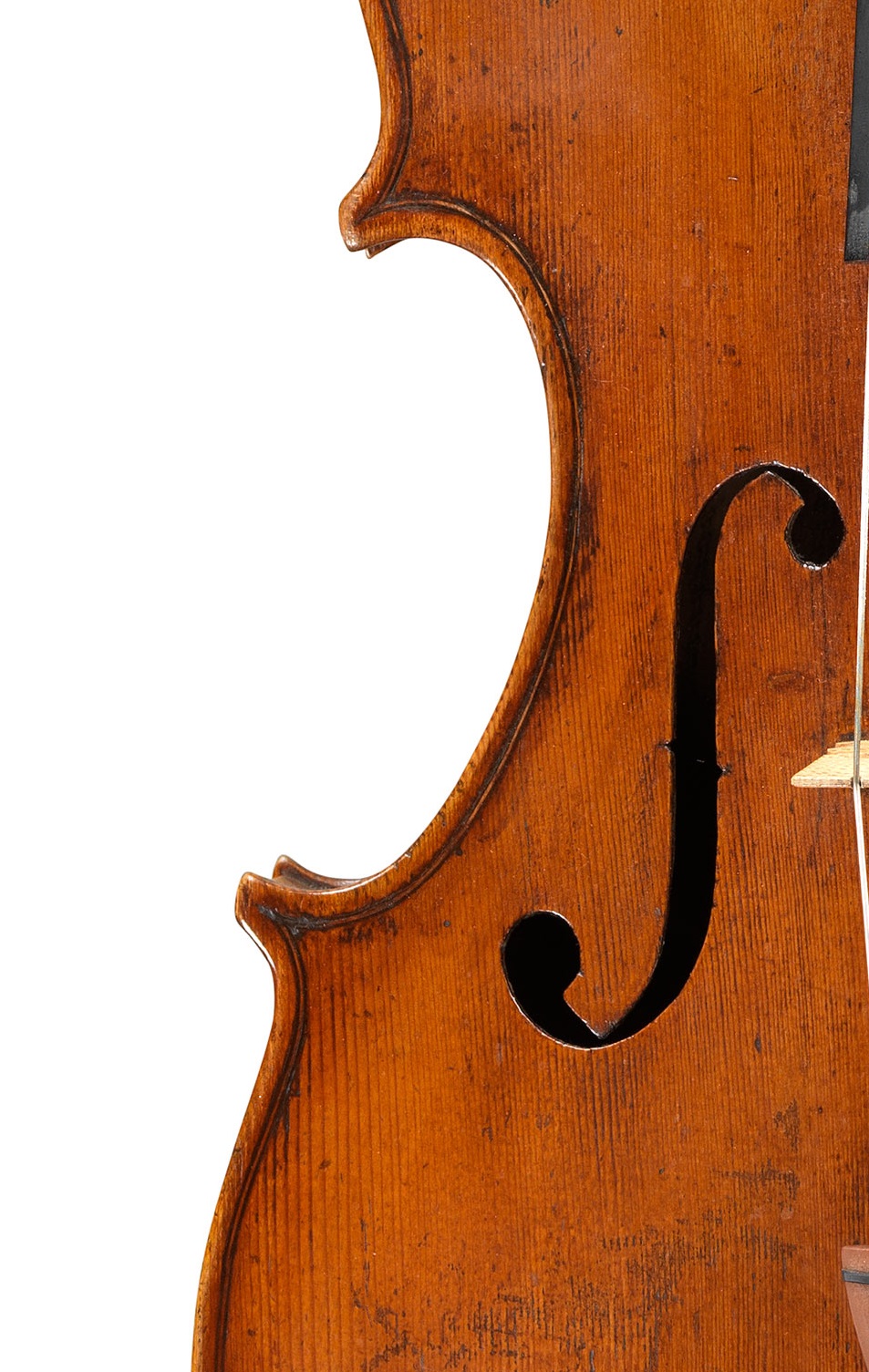 Viola by Giuseppe Dall'Aglio from our Notable Sales