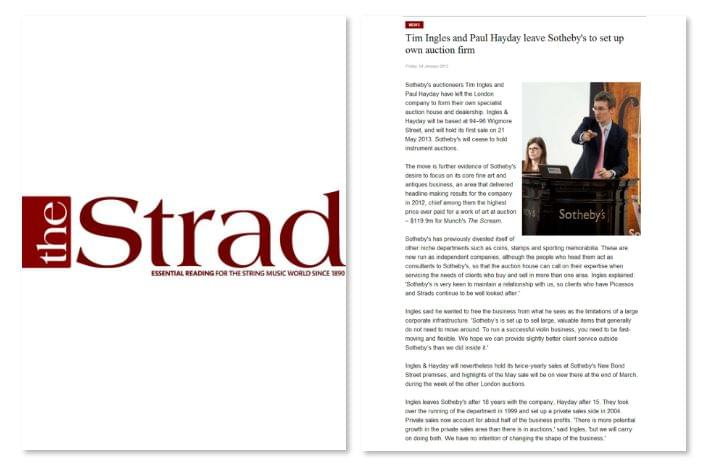 Sotheby’s auctioneers Tim Ingles and Paul Hayday have left the London company to form their own specialist auction house and dealership. Ingles & Hayday will be based at 94–96 Wigmore Street, and will hold its first sale on 21 May 2013. Sotheby’s will cease to hold instrument auctions.

The move is further evidence of Sotheby’s desire to focus on its core fine art and antiques business, an area that delivered headline-making results for the company in 2012, chief among them the highest price ever paid for a work of art at auction – $119.9m for Munch’s The Scream.

Sotheby’s has previously divested itself of other niche departments such as coins, stamps and sporting memorabilia. These are now run as independent companies, although the people who head them act as consultants to Sotheby’s, so that the auction house can call on their expertise when servicing the needs of clients who buy and sell in more than one area. Ingles explained: ‘Sotheby’s is very keen to maintain a relationship with us, so clients who have Picassos and Strads continue to be well looked after.’

Ingles said he wanted to free the business from what he sees as the limitations of a large corporate infrastructure. ‘Sotheby’s is set up to sell large, valuable items that generally do not need to move around. To run a successful violin business, you need to be fast-moving and flexible. We hope we can provide slightly better client service outside Sotheby’s than we did inside it.’

Ingles & Hayday will nevertheless hold its twice-yearly sales at Sotheby’s New Bond Street premises, and highlights of the May sale will be on view there at the end of March, during the week of the other London auctions.

Ingles leaves Sotheby’s after 18 years with the company, Hayday after 15. They took over the running of the department in 1999 and set up a private sales side in 2004. Private sales now account for about half of the business profits. ‘There is more potential growth in the private sales area than there is in auctions,’ said Ingles, ‘but we will carry on doing both. We have no intention of changing the shape of the business.’