A ‘self-rehairing’ violin bow by Pierre Simon for J.B. Vuillaume 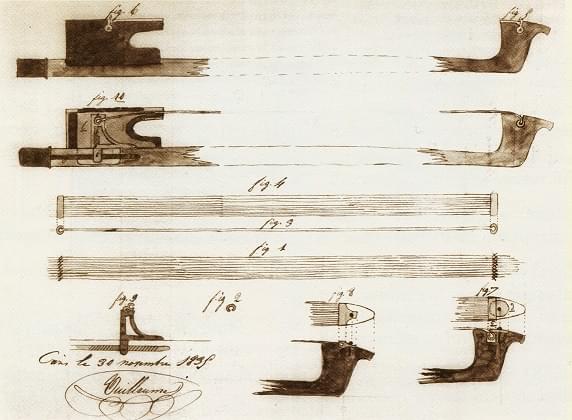 As opposed to the W.E.Hill & Sons workshop where, from the beginning of the 20th Century, W.C. Retford introduced the standardised ‘Hill Bow’ by employing the rigorous use of templates, J.B. Vuillaume allowed all of the bow makers in his employment (either whilst in the JBV workshop or as out-workers) to express their own individuality through their own personal designs. This freedom, permitted by perhaps an otherwise somewhat egotistical boss, has greatly helped the world of ‘bow expertise’ in piecing together the authorship of the extraordinary output from J.B. Vuillaume’s shop. Thus we can find bows branded Vuillaume A Paris, and later, J.B. Vuillaume, that show a continuum of work produced by the most famous French bow makers, from J.M Persoit to F.N Voirin.

Right in the middle of that distinguished list is Pierre Simon (1808 – 1881), arguably one of the finest bow makers of the 19th Century. During his career, he is recorded as having worked in JBV’s workshop between 1840 and 1844, then continuing to produce bows for the shop after setting up in his own right in Rue Croix des Petits Champs, Paris. The violin bow by Pierre Simon being discussed here is a superb example of a ‘self-rehairing’ bow, made for the Vuillaume shop, circa 1850.

It is most probable that the internal mechanism of these frogs were made by specialist outworkers, however, the quality of the ebony woodwork, plus the silver and mother-of-pearl fittings, would strongly suggest the same hand as the maker of the stick. Given the frog’s fatness across its width, it is inevitable that the throat would have been an ‘adapted’ form of the maker’s more recognisable form (as in this case); with the stick, there is less deviation from the makers’ classic style.

In this example, we can see from the profile of the head, the transformation between Simon’s earlier ‘Peccatte model’ and his later more rounded design with the identifiable curve to the back of the head. Although the head is slightly fuller (to compensate for the hole across the width of the head to take the hair), we can nonetheless see in the carving, the ridge line and the workings of the chamfers, the hallmarks of Simon’s hand. The stick is octagonal – which is rare in a Simon bow – but still follows the form of being slightly higher than it is wide, throughout most of its length.

This particular bow is of Simon’s best work and it is very rare to find a bow with such a frog in original and such excellent condition.

An indication that Vuillaume regarded Pierre Simon in the highest esteem is that many of the ‘specialist’ bows were made by this maker, after he had left the JBV workshop: examples exist not only of the self-rehairing bows, but also of the bows fitted with elaborately carved ivory frogs – these also occasionally with octagonal sticks.

This particular bow is of Simon’s best work and it is very rare to find a bow with such a frog in original and such excellent condition.